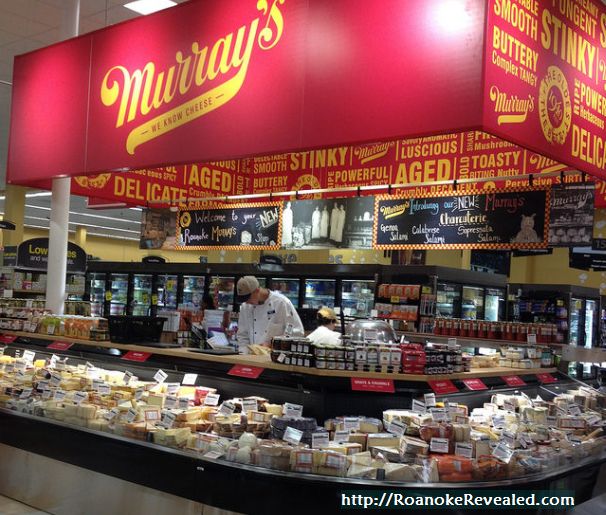 On May 16, 2016, Posted by Nanette Levin , In Roanoke people and places, By destinations in Roanoke,Foodie Finds,Murrays cheese,Roanoke attractions , With No Comments

One challenge in coming to Roanoke I didn’t anticipate was locating cheese.

When you live in an area for a long time, you start to assume your reality is universal, forgetting other places have different lifestyle choices.

Over the past 20 years or so, I witnessed a cottage industry of small farm cheese producers burgeon in Western New York (Finger Lakes area). That, coupled with easy access to Wegmans (a privately owned supermarket chain founded and still headquartered in Rochester) and its Olde World Cheese global selections, made it easy to conclude just about any cheese you could imagine could be found within a 30 mile radius. I figured these developments were happening near urban centers across the country. Clearly, I was wrong. I found Roquefort in Roanoke!

Finding Roquefort became a quest. A good Italian Pecorino Romano was also on my short list. It took more than five months, but I became victorious this weekend. There’s a new feature in Roanoke with a grand opening planned for June. Murrays is open already, though, if you want to treat your palate before this fun find makes the news.

This is a curious arrangement I’ve never seen before – think mall kiosk, but bigger, in a grocery store. Apparently this little shop, established in 1940 (it’s been sold a few times since but is still privately owned), partnered with Kroger in 2007 with a concept that is as inventive as it is delicious.

Basically, it’s a separate entity (the employees are paid by Kroger but work for Murrays) that’s run by Rob Kaufelt out of Greenwich Village (New York City). Murrays controls the branding, product mix, distribution, appearance and layout of the cheese shop space. Kroger houses it. Featured cheeses are selected and shipped from around the globe.

The only Murrays in Roanoke is at the Kroger’s in Tanglewood Mall. Such variety to choose from on just one side of the kiosk.

Who knew there was a Kroger’s in the Tanglewood Mall plaza? There’s no sign street side (Electric Road near 220) and it’s hidden behind the Firestone building. I spotted it on my way out of the Mall and figured I’d save some travel time buying eggs. I walked out with an additional $20 in (sharp) cheeses I will savor for some time to come.

As cheese has migrated more toward naughty on the healthy food scale, sharper and tastier cheeses can help you get your fix in much smaller doses. You can’t find that in a product with a non-refrigerated shelf-life of years. But, you can now buy it at Murrays at the Tanglewood Mall. It’s worth the stop whether you’re a local who relishes imported delights or visitor seeking some food supplies to make the trip tastier.