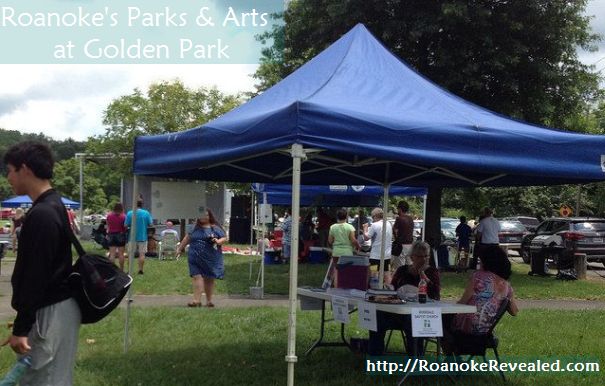 On June 27, 2016, Posted by Nanette Levin , In Roanoke people and places, By destinations in Roanoke,live music in Roanoke,Parks & Arts,Roanoke attractions , With No Comments

This weekend, I headed out for the first of five events planned for the summer as part of Parks & Arts. It wasn’t what I expected.

Parks & Arts is a series of free events held at parks throughout the Roanoke created as a “collaboration with the City of Roanoke and its neighborhood alliances.”*The 2016 schedule runs from June 25th (at Golden Park) through October 1st (Horton Park). Days, times and artist participants are mapped out (and listed in a brochure) long before the season starts.

The program is marketed as “Arts and cultural events . . . designed to promote community involvement as well as arts and cultural diversity.”* Perhaps other events throughout the year will feature more activities that appeal to adults, but the Golden Park 2016 debut feature was clearly designed for kids.

There was a bounce house, a face painter (listed on the brochure as an artist – I didn’t see any adult-oriented creatives at the event), tables set up for kid crafting, chalk provided for decorating the sidewalks and a stage with performers. During my time at the festivities (admittedly I didn’t stick around long), the performers were children being called to the mic one at a time to sing. There were some tented booths, mostly city, church or food related.

Golden Park is on the east side, heading toward Vinton. It’s hidden from the main drag (13th Street SE, which changes to Bennington Street SE) but a short drive from the primary road. If you take a quick right onto a residential street after turning into the offshoot drive (there is a small sign pointing to the park from Bennington but no additional directional aids from there), you’ll see the park come up on your left.

Abutted by a residential neighborhood, this Park is basically a kid’s playground. The facility includes a basketball court, a jungle gym, some swings, a small covered pavilion with tables and chairs, rest rooms and, at least at this event, a stage. It’s likely an appreciated resource for those nearby with kids, but probably not a place you want to spend a long time driving to.

Given the listed entertainment (Mill Mountain Theatre, Opera Roanoke, SWVA Ballet, etc.) and the way the event was promoted as an artist incubator scene, I anticipated finding plenty to do while waiting for the performances I came to see. If I were a ten, that would have been true.

As I now look more closely (and read between the lines a bit) at the lineup for the year, I suspect these events are geared more toward parents looking for a few hours of free entertainment for their kids than as a serious artist exposition.

So, if kids are in the mix on a summer weekend, this is likely a good fit. If you live in a neighborhood close to one of these parks, it’s worth the walk or bike ride to check it out. If you’re a visitor or resident adult without young kids in tow, the Golden Park event probably won’t get you giddy. I’ll check out at least two more (probably Mountain View and Elmwood  Park) this year for a better perspective on the adult appeal of Parks & Arts.

Perhaps the City will consider including more serious local artists as part of the programming in 2017. I’ll ask.

If Parks & Arts hasn’t made it to your “done it” list yet or if you are hearing about it for the first time, here’s the schedule for the rest of the year: