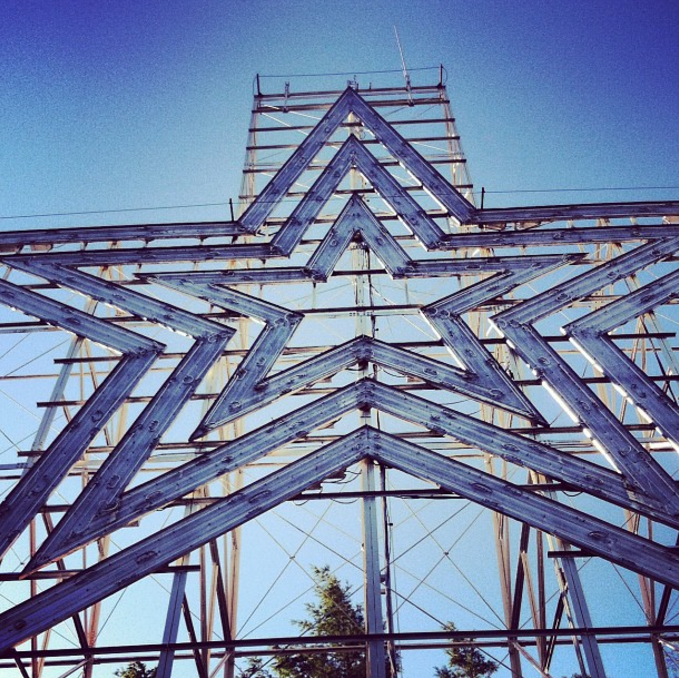 On April 11, 2016, Posted by Nanette Levin , In Roanoke people and places, By destinations in Roanoke,Mill Mountain Star,Roanoke attractions,The Roanoke Star , With No Comments

Also known as the Mill Mountain Star, this is a big deal in Roanoke. I figured it for a huge tourism stop with paid admission required, amenities on site and some fanfare surrounding the location. I was wrong. Granted, I decided to go find this landmark in February when snow was flying (not optimal timing), but didn’t expect what I discovered.

There is no admission cost. There wasn’t a tourism building, food purveyors or souvenir hawkers on site. It’s basically a park destination with a landmark, a great view and some hiking trails.

The Star is a metal structure with an observation platform nearby that overlooks the City of Roanoke with a network of paths in the park for nature exploration. Lights are not currently on during the day, but the structure is illuminated around sunset until about 11 p.m. The only barrier to entry is the park gate, which opens at 8 a.m. and closes at 11 p.m..

According to Wikipedia, “The Roanoke Star, also known as the Mill Mountain Star, is the world’s largest freestanding illuminated man-made star, constructed in 1949 at the top of Mill Mountain in Roanoke, Virginia. After construction of the star, Roanoke was nicknamed “Star City of the South”. It’s visible for 60 miles from the air and it sits 1,045 feet above the city of Roanoke.”

Of course, the same information can be found at the Visitors’ Association site and Parks & Recreation, but I’ve finally stopped bucking the lazy research trend and have embraced Wikipedia as a credible-enough source for such things.

Roanoke Parks & Recreation has a building nearby with some fun interactives (including the living kind) and programs for (mostly) kids. There’s also a zoo (it was closed when I visited) that you can walk to (car access is not permitted) from the information center.

What I found more magnificent about the trip than the Star was the Blue Ridge Parkway. While you can get to the Star from the city of Roanoke, it’s more fun to choose this alternative route. Apparently road closures can be common on in winter months and speed limits are strictly enforced (I haven’t encountered either), but the breath-taking stops with parking and views along the way are priceless.

If you want to capture pictures of the Star illuminated, make your trip at night. If you’re looking for some fun diversions that sing to your soul (Blue Ridge Parkway scenes) while heading to destinations that excite the kids (the zoo & Parks & Recreation Center) make it a day trip during tourist season months (not winter). You’ll have fun with what you discover along the way while gaining bragging rights about seeing the Roanoke Star up close.