Virginia ABC – What is it Wednesday? 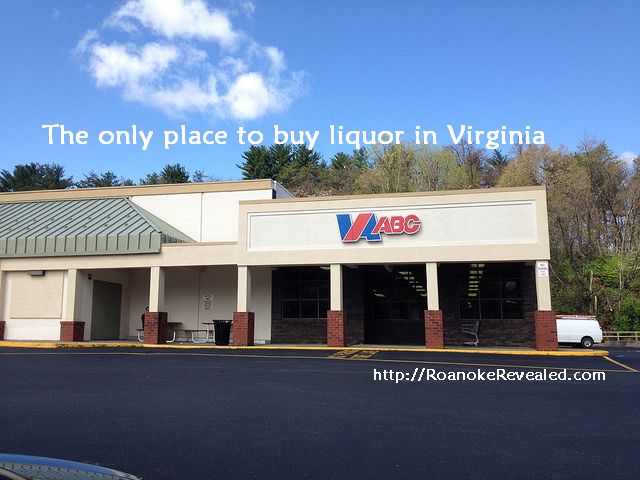 Virginia ABC – What is it Wednesday?

Soon after my Virginia transplant, I was looking for sherry. It’s a cuisine ingredient I enjoy, particularly with soups. After lots of time looking for it in the usual places – even grocery stores for the “cooking” variety (so not the same), I discovered the State controls all liquor sales. Control might be too light a term – the State is the only operator allowed to sell it. How weird is that?

If you’re looking for a bottle of anything beyond beer or wine, ABC stores are the only place to get it in the “Virginia is for Lovers” state.

Curiously, beer and wine are readily available at the oddest places – including Walmart.

ABC stores are numerous, but not obvious. You can code in a zip code to find one near you here. The one I visited was hidden at the end of a strip mall I had been to many times without seeing the storefront.

It makes me cringe (that media background thing) to cite Wikipedia as a source, but I’m feeling tired and lazy. So, here’s a condensed version of what you’ll find there:

“The Virginia Department of Alcoholic Beverage Control (Virginia ABC) is one of the eleven public safety agencies under the Secretariat of Public Safety and Homeland Security for the Commonwealth. The agency administers the state’s ABC laws (created by the General Assembly) with an emphasis on public service and a focus on protecting citizens by ensuring a safe, orderly and regulated system for convenient distribution and responsible consumption of alcohol.

The agency is a leading revenue producer for Virginia. The profits that Virginia ABC contributes—collected from sales of distilled spirits at ABC stores, taxes collected on beer and wine sales, violation penalties and license fees—provide much needed funding for use in programs across all secretariats, thus benefiting citizens in all areas of the state whether they choose to drink or not.

Since its establishment in 1934, Virginia ABC has contributed $8.6 billion to the Commonwealth’s general fund, which supports major education, health and transportation initiatives.”

That’s similar to what New York State claims about the heavily advertised lottery and hefty take on live racing facilities that offer VTLs (it’s not all true – more deficit and pork spending, less additional educational allocations). Of course, I’m not condemning either – I’ve enjoyed both drinking and gambling. It just seems ironic in the face of state-funded educational programs for gambling and alcohol addiction that such things are sponsored by the state, but that’s a topic for a different venue.

For a kind of creepy spin from the source, you can find more here.

Ultimately I did find sherry at Krogers (guess it depends on what store you’re in). I doubt I’ll see a need in the future to patronize an ABC store, but if you’re looking for liquor, that’s the only place to get it in Virginia.