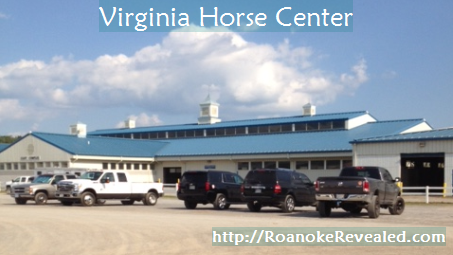 On August 29, 2016, Posted by Nanette Levin , In Horse lovers,Roanoke people and places, By destinations in Roanoke,Extreme Mustang Makeover,Roanoke attractions,Virginia Horse Center , With No Comments

This is a massive facility on 600 acres with eight barns that house 750 horses, 19 show rings, a combined carriage driving & five mile cross country course and campgrounds. There’s also coliseum that seats 4000 people. It’s about an hour north of Roanoke, in Lexington, Virginia, right off 81.

If you’re a local or a visitor with any interest in horses, this is a place worth the trip. There’s a calendar on the website so you can see if there’s something of interest happening when it’s convenient. Most events are free for spectators.

This past weekend featured the Extreme Mustang Makeover. Did you know this was coming to town? I didn’t either until someone posted this on a Meetup group as a get-together excuse. Admission for the finale and auction following was $15. There was no cost to attend events all day Thursday and Friday and up until 5 p.m. Saturday.

This is the second year in a row it’s been held in Virginia. Last year it was at The Meadow Event Park outside of Richmond. This was my first trip to the Center. I was amazed at the magnitude of this campus while simultaneously saddened to see such poor attendance by both spectators and vendors. What could have been sellout crowd event left most seats empty and a fraction of the booth space occupied.

Frankly, I don’t get it. This facility is enormous – way beyond what the local equestrian community could ever hope to support. Obviously, the initial (optimistic) intent was to make this a national, even international, mecca for world-class competitive events.

Yet, here was a wonderful opportunity to draw not only riders, but also spectators who knew little about horses to pay for cheap seats (or free during much of the three-day festivities) for fantastic entertainment. New spectators mean increased opportunities for future event revenue in rental, sponsor, vendor, food purchase, donor and attendee monies.

With effective marketing and support from the Roanoke area equestrian community, this could have created an annual must-stop locale for this nationally talked-about initiative. My guess is, the event was a booked space arrangement and the Center has a policy of not promoting “Third Party Shows.” That’s short-sighted. A little bit of investment in spreading the word could have helped bring thousands of new people to the facility for the first time for an event that invests heavily in building national awareness.

Can the Virginia Horse Center survive?

OK, I do kind of get it, but that doesn’t make it right – or smart. Apparently the Commonwealth of Virginia dumped the entire responsibility, including debt service, on the nonprofit Foundation in 2007. Initially created as a Public Private Partnership in 1985, the transition to 501(c)(3) Foundation management required a $11.5 million loan from the USDA, which in the most recent Annual Report logs as almost $12 million in long term debt (more than that with current liabilities).

According to the 2014-2015 Annual Report, general facilities operation costs are over $1 million a year, which do not include management and staff fees of another approximately $856,000. Operating revenues for this fiscal year were $3.4 million versus expenses of $3.7 million. That helps explain why the place looks unloved. It’s a heck of a load to bear for a structure that generally involves mostly volunteer support. The finalists – and pitiful attendance above.

Apparently, there have been some big changes in the past year or so. John Nicholson was hired as CEO away from the Kentucky Horse Park, where he orchestrated the first World Equestrian Games in the U.S. (I was there in 2010 – it was an incredible undertaking). They’re addressing the net loss on food revenue. The City of Lexington and County or Rockbridge have offered additional support with increased room tax proceeds for a two year period. Phelps Media Group was hired to market and represent the Center (big fail on the latest event if promotion was part of their charge).

Can this facility survive as a Foundation run and supported venture? Time will tell. There’s so much more this Center could be doing to increase revenue and visitors now.

Offering a renowned trainer permanent space at the place with stalls for students (are all 750 stalls ever fully occupied?) and additional day-long clinic opportunities could help keep the place alive and pay for some maintenance costs with stall rentals, food  purchases and supply markups (bedding, feed, etc.).

Encouraging Pony Club and 4-H riders to meet there weekly could introduce a new generation of riders (and parents able to donate) to this local treasure.

Encouraging local equestrian groups to use the facility for schooling and smaller competitions could lead to much bigger bookings.

The current focus seems to be on attracting grand events – which is a great strategy if it’s supported with promotion to get people there. More importantly, though, the venue needs to make it a place the local equine community gravitates toward as competitors, spectators, vendors, sponsors, donors and promoters. Without that, success will be challenging.

Equine enthusiasts in the area ought to consider attending events as a spectator or competitor. Donations are a decent percentage of the annual budget – logging in at 11% in the latest reported fiscal year, which isn’t too shabby considering it’s only been seven years since the Foundation was left twisting in the wind.

Hopefully, those setting the vision for this facility will come up with some creative strategies to start getting ahead of the maintenance issues and debt service. They also need to get better people or policies – or both – in place to promote the national events they do book. If not, this local resource will continue to languish. For now, the Foundation has been given a little bit of breathing room with increased occupancy tax income, but that’s short term and doesn’t resolve ongoing budget gap issues.

Maybe it would be wise to check this place out sooner rather than later.