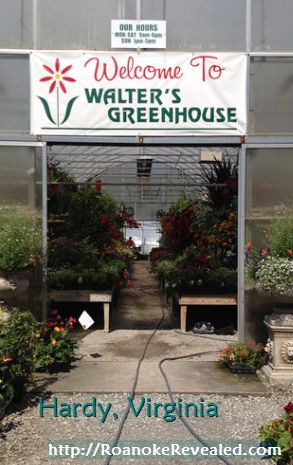 On July 18, 2016, Posted by Nanette Levin , In Roanoke people and places, By Nurseries in Roanoke,Roanoke destinations,vegetable and herb gardening,Walter's Greenhouse , With 2 Comments

I first saw Walter’s Greenhouse goods at the South County Farmers Market. The displays were better than others, occupying the largest area. It seemed they were a large conglomerate simply there to push people to their multiple area retail locations . I was wrong.

During a later visit toward the end of June, I paid more attention. I was getting ready to start “landscaping” a home that had been trampled – inside and out – by contractors. Work wasn’t finished, but I was anxious to start dreaming of a day when I could call my house a home.

Janet didn’t pay much attention to me initially. She was busy watering her plants. Once we spoke, it was clear she had deep knowledge and a passion for the business beyond hourly employee realms. As we started chatting, I discovered she was an owner, along with her sister, who had taken over a business their mother started to send them to college. Mom’s still around, but the daughters have assumed the helm. Janet commented to me she was a college educated plant lady. I can relate.

Sadly, this was the last week at the market for Walter’s Greenhouse. Their primary facility was closing the following Thursday. I felt compelled to make the trip to view the scene described. What I witnessed went miles beyond my expectations. These gals are genius in display presentation as well as plant care strategies to maximize yield and minimize labor costs.

Janet runs the business with her sister Evelyn. They start work in September, propagate throughout the winter then open their doors April through June. They’ve discovered the cost of employees to water and maintain healthy full plants isn’t justified by customer purchases once July hits. So, they cut back the tops and roots of perennials, put them outside under automatically sprinklers and mostly take the summer off. The two sisters, with support that continues from mom, handle the planting, propagation and caring for plants fall through winter until they open the facility to the public in the spring. Four additional employees support the company. located in Hardy, Virginia, southeast of Roanoke, during prime selling time.

I was amazed by the greenhouse displays. Two days prior to breakdown, the presentation was awesome. Evelyn is mostly responsible for the design, which they change out each year. Even if you’re not a plant lover (or are a black thumb) it’s worth the trip just to see the artful display in the buildings. Walter’s Greenhouse is now closed for the summer months, but if you’re in the Roanoke area April through June, it’s a must see. The trip will take about ½ hour from Roanoke City, but it’s a beautiful ride and a scene you’ll remember (and want to take pictures of) as well as a fun family or couple outing.

Live here year round? Why not make this your first stop for annuals and perennials come spring?